Rethinking frontage with The Howard

Rethinking frontage with The Howard

by Brad Kingsley, for Arkansas Times

In the cycling world, commuting and recreational riding are distinctly different cultures. Whether you’re commuting to lowering Manhattan on the Hudson River Greenway or exploring the landscape of Northwest Arkansas via mountain bike, cycling shapes your worldview. In the cycling world, the differences between commuting and recreation are distinctly different cultures; in Bentonville, however, and across Northwest Arkansas, those two worlds have merged into a unique approach to urban planning, opening doors for inventive urban design and architecture.

Trails have influenced development patterns in Northwest Arkansas in such a way that, by my rough calculations, there have been more than thousands of multi-family units built within the last five years that are within one mile of a trailhead, giving residents instant access to more than 250 miles of paved and soft surface trails. On the surface, trail access may seem like nothing more than a convenience for a niche community looking for leisure and recreation opportunities. When considered in a larger social and economic context, trail development is at the center of multiple issues facing growing communities.

Trail infrastructure helps address several important challenges facing cities today: Major shifts in population as people seek out a higher quality of life. More health and wellness opportunities to combat a growing public health crisis. A remote workforce requiring more flexibility during the workday to attract talented and energetic future leaders and innovators. The strategic planning of soft surface, single-track mountain bike trails combine recreational opportunities with transportation infrastructure, seamlessly integrating nature into the urban fabric. Much like the Highline in New York City, which capitalized on the unique characteristics of its time and place, Northwest Arkansas is channeling its distinct geographic, cultural, social, and economic identities towards an innovative approach to urban development. This is placemaking in practice.

In 2019, we were approached by Newell Development with a unique opportunity to design a mixed-use building on SE 2nd Street that “backed up” to the Razorback Regional Greenway. Named ‘The Howard’, the building would contain 80 multi-family units, a resident fitness center, community room, indoor bike storage and a 2,500 sf commercial space. Bordered by SE 2nd on the south, the site was at the intersection of Central Ave, the Greenway, and Town Branch Creek on the north and east – literally at the intersection of roads, trails, parks and urban waterways. 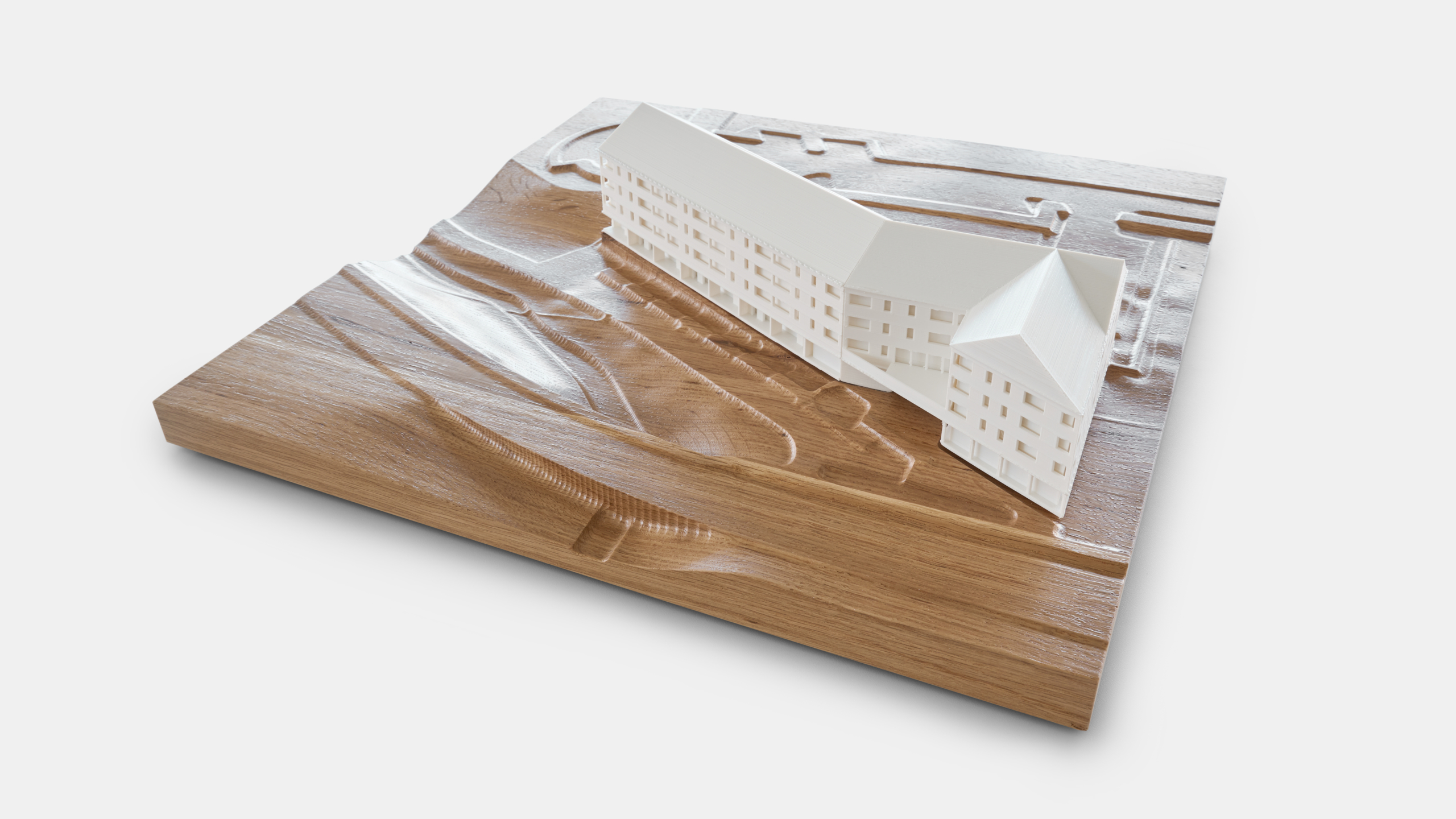 Depending on one’s approach, the site could be seen as an edge or a gateway. Approaching from the west on SE 2nd, the site creates a hard edge, a strong terminating boundary to a low-density single family residential neighborhood. However, approaching from the east on Central Avenue, what was originally the “back” of the site, it had the potential to be a significant gateway into the downtown core. This change in use from single-family residential to medium-density multifamily prompted a repositioning of the site and required us to think differently about frontage.

Positioning of the building gave us the opportunity to rethink the spatial relationship between the building, trail, and Town Branch Creek, imagining the creek not as peripheral drainage, but as an active public space and asset to the site. We referenced vernacular waterside buildings that utilized waterways as active, productive frontage, recalling traditional sawmills and grist mills frequently found in Arkansas and vital to early economic development. These buildings, like Van Winkle’s Mill in Hobbs State Park and the Boxley Gristmill in the Boxley Valley area of the Buffalo National River were equal parts buildings, infrastructure, and manufacturing, but not limited to remote regions of rural Arkansas. In fact, Bentonville has a rich history of activity and development along Town Branch Creek, originally named Spring Creek, and whose spring originated at the development’s site. One block north, at the intersection of NE 2nd and Town Branch Creek, is the former home of the Macon and Carson Brandy Distillery, which opened in 1893 and was at one time the largest distillery west of the Mississippi River. The Howard from the intersection of Central Avenue and the Razorback Greenway.

The question we asked ourselves, figuratively and literally, was, “Can the building have an address on the Razorback Greenway?” The answer from the city….was (literally) a hard no. In fact, zoning guidelines and fire access required the building frontage to be on the street with a maximum setback of 25 feet. This presented a challenge for a building that would instead face the trail and creek on the “back” of the site. But, we persisted in taking a different approach to frontage and worked with city officials on exceptions and creative solutions to standard zoning requirements.

We placed the primary commercial space at the intersection of the Greenway and Central, with a strong formal presence and directionality, almost encouraging trail users to continue to the Greenway’s next destination once their stop is complete. Approaching from the south, it’s hard to tell where the trail ends and the building begins; the entry plaza to the building reaches out and engages the trail with a sequence of spaces horizontally and vertically, creating a gracious and gradual transition from trail to building. The transition gives riders plenty of space to exit the trail, dismount and secure their bikes, and continue upwards to a public gathering space with plenty of space to relax, enjoy food and drink, and people watch. View of the public plaza at the intersection of the building and trail.

The activation of the trail frontage extends along the east façade of the building, creating a gradient of public-to-private space in both plan and section. This was a particularly challenging condition, one that could have easily ended up as a single, out-of-scale retaining wall confronting passersby with a lifeless view and unsafe condition. This was a significant challenge with the grading and retaining walls that were needed traverse the change in elevation.

The solution was to create a series of terraces that step down the site, telescoping between the raised public plaza and the continuation of the trail, creating a semi-public zone that allowed diners, patrons, and people watchers a place to gather while bicycle traffic continues to flow. This gradient of public to private space continues vertically, each layer buffered with landscape and setbacks, until the transition to private is complete, resulting in private porches extending from the ground level residential units that overlook the terraces and trail. View of private porches and semi-private terraces at the trail frontage.

The building’s form and entry sequence were also designed from the vantage point and perspective of the trail user, not the car, with key viewpoints established early in the design and continually referenced. A bend in the building’s geometry makes a formal transition from trail frontage to the façade facing Central Avenue. The result is a triangular shaped void, located at the apex of the site, that forms a public entry plaza with an occupied communal roof deck for building residents. The façade of the building folds into and under the covered roof deck, creating a seamless visual transition from public to private. This condition becomes a key terminating view from the north as one approaches from the Razorback Greenway.

These spatial and programmatic links between a building and its surroundings are critical to weaving a building into the urban fabric. They create the social glue that bonds us together as a community. Spaces where the public and private can interact create a shared sense of ownership and accountability to each other as citizens of the same place. It is the responsibility of developers and architects to consider not just the immediate needs of the project, but also the greater reach of the building and its users, approaching each building as a part of a larger network of public spaces.

This level of site specificity also creates a unique spatial experience that’s essential to placemaking. The folds and bends in the geometry of the building, combined with the connection to the trail, create an entry sequence that resulted from and can only be found on this site. Likewise, the building offers a unique layout of apartment units that won’t be found in other projects. Porch units that overlook patios, the Greenway, and Town Branch Creek are a product of the unique conditions of this site and give residents a front row seat to trail activity and the creek’s natural beauty. Canopy units along the north of the building put residents in line with the tree canopy along the creek filter morning light and connect residents with the mature tree canopy. The corner units at the northwest apex of the building have generous living rooms with panoramic corner views to the trail and downtown – a view that cannot be recreated anywhere else. These unique spatial arrangements form the basis for the resident’s experience with their place, and form the foundation for memories of place and time.

View from Razorback Greenway while under construction.

The building is currently under construction and is slated to be complete later this summer, but the impact can already be felt on the Razorback Greenway now that trail and plaza work is nearing completion. What once felt like a peripheral route bypassing downtown now feels like a destination of its own, and the stage is set for an active and engaging urban frontage. The process was not linear; it required setting priorities early in the process and managing the budget throughout design to ensure those priorities were realized. It required working closely with city officials on unique, site-specific design solutions, property line adjustment, and a significant reinvestment in public improvements by Newell Development. Ultimately, the process, like the building, was proof that buildings are not stand alone objects, but part of a larger network of community and social infrastructure.